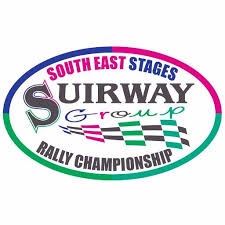 The SUIRWAY GROUP South East Stages Rally Championship is onto the second phase, it’s tarmac all the way until September. The first two rounds were forestry events, The Willie Loughman Forestry Rally, Carrick-on-Suir during February and the Munster Moonraker, Ballyvourney in April.

Both events attracted increased entries compared to previous years. Part of the attraction is apparently the cheaper fees associated with forestry compared to tarmac. That aside, the value offered by the SUIRWAY GROUP Rally Championship has its own attraction.

The Competitors have the opportunity to mimic, to a certain extent, the same challenges as offered by WRC events, competition on forestry and tarmac events. This is what sets this championship aside from the other championships in Ireland.

This is a Group based championship where cars of similar or equal capacity are classified into six groups where points of equal standings are awarded to each group. This allows all competitors the opportunity to win the championship outright.

The Moonraker Stages in Ballyvourney were very smooth and super-fast, Wind Energy has its benefits! The rally attracted one of the largest entries to forestry rallying in recent years. The weather played its part with a dry and mainly sunny day to keep tyre selections to a minimum. The compact route had non-stop action for crews, service crews, officials and spectators.

The overall winner was the local hero Keith Cronin in his Fiesta R5 who was getting in some valuable seat time before his next event in the British Rally Championship. Hot on his heels were the Moffit brothers, Josh and Sam from Monaghan. The brothers are usually only separated by seconds as they compete in identical spec. Fiestas R5s.

All changed in the dawn after the Moonraker when Adrian Heatherington, Toyota Corolla WRC, became the clear leader on 51 points. Winning the group and maximum points on the bonus stage was sufficient to put daylight between himself former joint leader Paschal O’Shea. He was helped in no small way by declaring the Moonraker Rally as his bonus round to double his event score.

One of the quiet men of Rallying is Kilkenny’s Richie Dalton, Subaru Impreza, group 6 who has slipped into second overall on 36 points. He made the step up last year from the Honda Civic to the bigger group. He is a relative newcomer to forestry rallying and is enjoying his foray into the woods. He also made the pragmatic decision to score double points before the tarmac rounds.

Third overall is Paschal O’Shea in the relatively rally standard Escort MK2, group 2. Paschal was the winner of the sponsored SUIRWAY GROUP entry for group 2 in the Moonraker Rally. He is on 33 points. Despite winning the group his points for the win was 12 points due to a shortage of registered starters.

Junior 1000*. Alex Byrne, Peugeot 107, 36 points. This is a new class (group) in rallying to promote younger competitors in the sport. It was a relative hastily introduced class this year but is expected to feature as the championship develops.

Group 2. Pierce Doheny, Opel Corsa, 13 points is a little bit alone now but will have company when the Civics take to the tarmac from Carlow onwards.

Group 3. Usually the preserve of the tarmac hot hatch Honda Civics, whose owners are reluctant to have their tarmac spec cars pebble dashed on the forestry surfaces.

Group 5. Micky Conlon, Escort MK2, 28 points. He is one of the great supporters of this championship who features on every round. Once again many of the cars qualified for this class remain in tarmac spec but competition will escalate on the tarmac rounds.

Group 6. John Rafter, Mitsubishi Evo, 19 points. A former winning navigator in this championship who has made the transition to the busy side of the office. He also won the draw for a sponsored** entry to the Carlow Stages Rally. Adrian Heatherington winner of this group in the Moonraker is also the beneficiary of a sponsored** entry in Carlow. Gemma Kerley, Subaru Impreza, 11 points.

*Not eligible for overall awards

SAFETYWhen spectating please obey the Marshalls and stay away from the really exciting places unless it’s safe to spectate there. Please be responsible for your own safety and the safety of others. All the stages and stage locations have been extensively safety assessed. This is for the safety of the crews and the spectators. NO ACCIDENTS or SERIOUS INCIDENTSat the event will help preserve the future of rallying. The cost of competing is already more expensive for competitors due to rising insurance levies: fewer competitors will make events far too expensive to run.